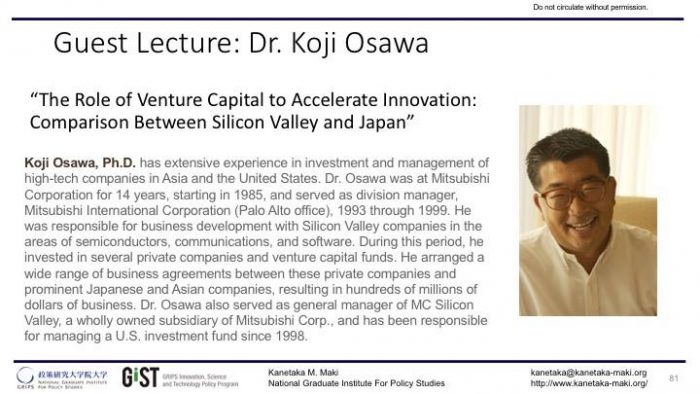 This is to announce the following special lecture by Dr. Koji Osawa that is an extension of Prof. Kanetaka Maki’s class on “Science and Technology Policy and Entrepreneurship.” Should you wish to attend below, please be registered by sending an e-mail to: kanetaka-sec@kanetaka-maki.org that is on the CC line of this message.

Lecture title:
“The Role of Venture Capital to Accelerate Innovation: Comparison Between Silicon Valley and Japan”

Brief BIO of the lecturer:
Koji Osawa, Ph.D. has extensive experience in investment and management of high-tech companies in Asia and the United States. Dr. Osawa was at Mitsubishi Corporation for 14 years, starting in 1985, and served as division manager, Mitsubishi International Corporation (Palo Alto office), 1993 through 1999. He was responsible for business development with Silicon Valley companies in the areas of semiconductors, communications, and software. During this period, he invested in several private companies and venture capital funds. He arranged a wide range of business agreements between these private companies and prominent Japanese and Asian companies, resulting in hundreds of millions of dollars of business. Dr. Osawa also served as general manager of MC Silicon Valley, a wholly owned subsidiary of Mitsubishi Corp., and has been responsible for managing a U.S. investment fund since 1998.